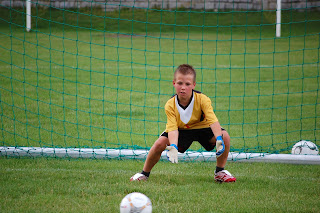 Should he allow the weaker opponent to score?

I have written a lot about this subject, and I thought I would not do it again. However, I find hard to ignore so many absurd overprotective comments that often appear when a team wins by many goals or points in a children football or basketball game. This time it was in Las Palmas (Gran Canaria, Spain), where in a 10-year-old children's football match, the Unión Deportiva team (from the club whose professional team is in the top division of Spanish football) defeated a modest team by 47-0. Two days later, most probably there were not news about Ronaldo`s or Messi´s issues, and surprisingly, the sports section of a powerful national television network opened with the news of this "scandalous" result illustrated with a strong label: "Children humiliated”. Then, the usual: that in these ages the important thing is education (what education?), that the values ​​of sport… (without saying which values), that something must be done to avoid children having traumas (sic) , that from 5 or 10 goals difference no more goals should be registered in the score sheet…

The coach of the Union Deportiva (the winning team), who was considered by the media and the social networks as guilty for this "abuse", defended himself by saying that he had instructed his players to focus on different objectives rather than to score goals (!); obviously, seeing what happened, to play a football game without trying to score was something that these 10-year-old lads did not understand well; and furthermore, taking into account that the opponent is the last at the competition standing with no wins and neither draws, and has been heavily defeated by many other teams, the difficult thing was not to score unless the goal would had been removed!, an idea that I would not be surprised if soon is suggested by an illuminated "educator" or "psychologist". An adult linked to the defeated team, asked about how the children felt, said that they felt bad "because all the noise in the media and the social networks about their heavy defeat”. Not due to the defeat itself, but because the noise in the media and the social networks!

In these ages, children may participate either in non-competitive physical activity or competitive sport without giving importance to results, standings, etc., which usually is the most appropriate to  benefit from the experience; but if they compete, they compete; and then they have to learn to compete with dignity and accept any result. Losing by many goals or points is not humiliating, neither the kids usually perceive it like this in first place. We, the adults, through our comments in the media and social networks or expressing this in front of the kids, are the ones who encourage the idea that it is humiliating. On the contrary, losing by many goals or points is a great opportunity to become stronger and begin to understand life better. Obviously, if this happen every weekend it would be something very frustrating which will provoke that children feel discouraged and may want to quite from sport, so it is not good that this happen very often, although in no case will it cause traumas that impede the healthy development of children involved in sport. Please, do not invent!

The best situation is that a team that competes, play most of the games against opponents of similar level, but nothing happens if from time to time it loses or wins by a big score difference. And if a team receives heavy loses every week, this means that it is not participating in the competition that corresponds to its level. That being the case, the responsibility of the repeated abrupt imbalance in the scoreboard is not of those stronger opponents who put their effort into scoring goals (which is the purpose of the game), but of the adults who have registered that very weak team in the wrong league. Is there only that league? In football it is unusual that there are no other options, but being the only league available it would be more reasonable to find other alternatives to play football, such as for example, training to improve and playing games among themselves until the players have the proper level to compete against external opponents.

It is questionable whether powerful clubs like the Union Deportiva or others, should have 10-year-old teams. Probably, they should not. They gather the best players of their environment weakening their opponents, and also have better means to prepare, so, usually, their competitive experience every week is killing very inferior rivals. Is that the best way to improve for those children who stand out now? Evidently, no; and in fact, the vast majority does not go very far. But this is another issue that should not deviate us. Whether being superior, similar or inferior to the adversary, participating in a competition match is, as the name indicates, competing; and in football that means trying your best to score goals and avoid that the other team scores. We talk about developing values ​​and education over sports performance in youth sport. Agree; but what values ​​are those? Don´t do the best effort? Is that educational? Respecting the weaker opponents is not to make it easy for them, but to act with sportsmanship, without mocking neither exceeding external signs of euphoria when the team is winning widely. With that respect, the inferior team is not humiliated. However, it is very humiliating to know yourself inferior and to see that the superior rivals don´t want to shoot to score because they feel pity about you. What about the dignity of those who lose? Is it related to a not bulky score, or to the fact that the opponent respects you as an equal? Children humiliated because they lose heavily, or because they are treated like low category poor boys who need a charity treatment?

About stopping the registration of goals or points in the official score sheet when the difference is very wide (for example, just after 10 goals in football or 50 points in basketball, as it is ruled in some regions of Spain), with all my respect to those who support this, it is one of the most aberrant and humiliating measures that I've heard in my life. The officials may stop registering goals or baskets achieved, but as currently happens, these will continue to be covertly counted by parents, coaches and the own children, so everyone will know what the real result is. Why this overprotection? We defend that sports should serve to educate children, and nevertheless, we teach them to ignore reality and believe in a lie to feel better. Educational? Values? It is much more humiliating to have to explain that the score sheet had to be closed because the other team had 10 goals of advantage in the 20th minute, than saying that the other team was much better and then won by many goals or points. Moreover, as I pinpointed above, the latter is not humiliating, but part of a competition game. And the experience of many years in sport is that, regardless how hard it is, children learn to assume defeat when adults around them accept it naturally. Those who speak of humiliation are coaches, managers, organizers and parents. They are the ones who feel humiliated or interpret that children are humiliated. It is the ego of adults that suffers, and that is coupled with the tendency to overprotect children: always have to have fun; always have to be happy; never have to feel the slightest disappointment or frustration. Is this education for life?

In "Alice in Wonderland", there is a race in which the participants leave and arrive from and to where they want, and in the end, the verdict of the dodo bird is that all have won and, therefore, all must get the prize. When sport becomes this, it may continue to be a source of entertainment, but it loses its strength as an educational and value development tool. The sport competition is a very valuable instrument to learn to tolerate frustration, overcome difficulties, persevere to improve, seek excellence and become mentally stronger, always respecting colleagues, opponents and rules. A powerful tool that teaches to accept that sometimes you win and others you lose,  and offers the opportunity to learn to manage both "impostors": victory and defeat; the joy and the disappointment. Obviously, the competitive dose should be appropriate according to the age and level of the participants, but this does not mean that absurd norms must distort which in reality means competing. Following the aberrant contradiction of  “doing competitive sport but without competing”, why not to establish that all the teams, necessarily, have to score a minimum of goals so that the children leave happy and have no “traumas”? In the last part of the game, the goalkeeper of the team winning by many goals would have to let the opponent to score (educational?). And even if those goals were not scored, the score sheet of the game would reflect that they were achieved (educational?). It could be also established that those who are much better should play just with one leg, or to remove from the pitch the goal of the team that is losing, so the superior opponent can´t get more goals. More ideas to enhance the "educational" values of sport?

The problem is not in the competition, neither the solution in adulterating its essence, but in how we adults handle such a powerful tool. There are coaches who are obsessed with winning at all costs; parents who press and overprotect their children; organizers who invent rules to justify their presence; and media that take advantage of striking results to denounce alleged grievances that are soon forgotten. Luckily, there are also many adults who act responsibly and understand that the protagonists are the children and not their own egos, disruptive ideas or changing emotions. These adults understand, and act accordingly, that truly competing, with better and worse days, joys and frustrations, help young athletes to become stronger to face life, and that both inappropriate demands and overprotection nullify or minimize this valuable effect.

"We lost 47-0 and we go with our heads up because we did what we could and the rivals were much better. Congratulations to them. And thank you for treating us with respect, without feeling pity for us. Now we are somewhat discouraged, a little low. It is normal. But on Tuesday we will train and have fun playing football again. And next week we have another game. Let's see if we do it better than today”.

In order to take advantage of sport to develop mental strength and promote key values ​​to cope with life, it would be more appropriate that adults help children to react more or less like above, instead of insisting on the absurdity of being humiliated or supporting that the score sheet of the game should reflect a lie. Children humiliated, or adults who miss the opportunity to educate them?